In Normandy during D-Day Commemorations a new event has become popular in the last two years. It is the resurrection of an American style football game that was once organized by American units stationed in Champagne (Reims) region during WWII. Believing that a victory was imminent, they organized, held tryouts, named it the “Champagne Bowl” and set it to be played on Christmas Day, 1944.

As history tells, events took place that cancelled the game, as 101st Airborne was called to the Ardennes to help in what would become known as the Battle of the Bulge. The Champagne Bowl forgotten.

When Helen Patton became aware of what is known as “the game that never happened” in 2017 she began communicating with the 101st Airborne to plan this game at the D-Day Commemorations in 2018. In May of 2018, Patton Legacy Sports was formed to honor and curate General George S. Patton’s Olympic and athletic legacy. Together with his granddaughter, the 101st Airborne, the 101st Airborne Museum in Bastogne and the town of Sainte-Mere-Eglise, the flag football game was played. Born out of a desire to honor her grandfather and the men that fought alongside him, what is now called the “Remembrance Bowl” returns to the D-Day Commemorations each year.

“Who knows how many of those guys made it home, let alone by Christmas, and as you know what that Christmas was like. So, I thought it would be a good idea to play the game that never happened at an event where people come from all over the world to honor and remember. It’s a new way to commemorate. It’s a way to turn the page of history. We can do this in their stead.” ~Helen Ayer Patton.

Patton Legacy Sports is committed to seeing this game take place each year at the D-Day Commemorations as well as work with hometown high school teams to play this game each year in honor of the soldiers that could not. Currently exploring these and more ideas like it, Patton Legacy Sports is committed to fostering the camaraderie and the historical relevance of the Remembrance Bowl. 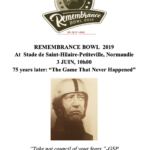 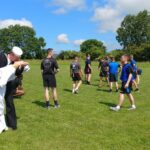 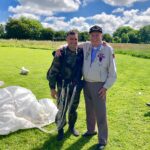 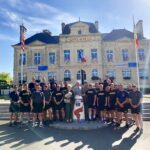 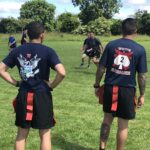 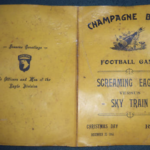 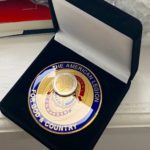