Originally a one-day competition combining discus and javelin throwing, a long jump, running and wrestling, the Greek Pentathlon was introduced in 708 BC. When founder of the modern era Olympic Games, Pierre de Coubertin, revitalized the sport for the 1912 Olympic Games in Stockholm, he designed it mindful of the ultimate challenges of an athlete of that era. Rapid-fire pistol shooting, followed by a 300-meter swimming race, fencing, a cross country equestrian steeplechase, ending with a 4,000-meter cross-country run. Lasting over a period of not one, but five grueling and intense days of competition, it was structured around the comprehensive duties of a cavalry soldier.

Pentathlon’s international governing body explains the events and particular sports choices in the following way: “The choice of the five diverse and unrelated sports which make up the Modern Pentathlon arose out of the romantic, rough adventures of a liaison officer whose horse is brought down in enemy territory; having defended himself with his pistol and sword, he swims across a raging river and delivers the message on foot.”

Patton’s personal dedication to physical fitness and remarkable athletic ability in running, fencing, shooting, and riding showed him to be a superior United States candidate representing the United States in the 1912 Olympics in Stockholm, Sweden. Patton had learned of his appointment to the US Olympic team just two months prior to the games beginning. His unwavering training regime and discipline bordered almost on the extreme and he was renowned for working through injury and pure exhaustion. He ultimately finished 5th in Pentathlon.

The first day of competition began with target shooting. While most of the contestants fired with .22s, Patton decided on shooting his Army issued .38 as he felt it was far more suitable given his military standing. It was this particular event that caused controversy that is still discussed to this day. It was a source of fierce contention and it was debated that the score was not based on the outcome of his shots missing the target, but that the shots had passed through holes already left by previous rounds.

Patton’s ability to shoot was never in question because he was already a renowned shooter, and had shot a near perfect score at practice the day before. Though many felt his explanation had some credence, the judges could not find any remnants of the missing rounds.

Following Day 1 Target Shooting, Day 2 of the Competition began with 37 athletes competing in the 300-meter freestyle swim, something Patton had not practiced in nearly three years. It was only two months prior to the Olympic Games that he learned he was to compete. Therefore, he rigorously attacked training for it with the same obsessive drive he approached everything else in life, and ended up in seventh place.

Day 3 and Day 4 were dedicated to fencing. The courts of the Royal Swedish Tennis Club hosted this combat sport. It is easy to understand why Patton considered fencing to be Pentathlon’s most challenging match, as each of the 29 remaining men had to ultimately face every other participant. Patton’s fencing tactics were exceptional and he utilized a forceful, all-offense strategy to finish in fourth place. Patton’s inclination to use offense as his primary strategy would continue to become the hallmark of Patton’s wartime and military legacy. It was fencing which offered Patton his greatest source of pride. He was the only man, and an American at that, to have defeated world renowned French swordsman Jean de Mas Latrie.

Day 5 held the steeplechase, a homage to the skilled equestrian. This was Patton’s best performance. Though today’s Modern Pentathlon is an unknown horse draw prior to taking the jump course, up until 1920 a participant could use their own horse. On this day Patton’s filly was injured, and he ended up having to borrow a Swedish cavalry horse. Despite not having time to familiarize himself with the substitute, Patton received a perfect score, registering sixth place after being ranked by course length overall speed.

The final competition and the most physically challenging by many accounts, was the 2.5-mile run. This race would go through heavy forests and muddy swamps with no participant allowed to view or study the course prior to the day of competition. On this day, one of the hottest days of the summer, two athletes fainted. Another died.

It is argued by many that if it weren’t for the “bullet controversy” in the target shooting part of the games, Patton would clearly have won a medal and broken the Swedes hold of the three spots on the podium. Out of 43 international contestants, George Patton ultimately finished in 5th place overall. Ever the embodiment and living spirit of competition, Patton immediately sought a second chance and secured his place on the US Team to compete in the next Olympic Games to be held in Berlin. However, WWI and the aftermath would forever change his hopes of second chance at a medal and he would not again have the opportunity to compete.

Though Patton is remembered as one of America’s greatest commanding generals it ever produced, it was first through sportsmanship and sports competitions that Patton was able to practice, fine tune, and perfect that which he would through history be known for on the battlefields. His signature all-offensive strategy and fearlessly direct tactics. 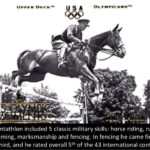 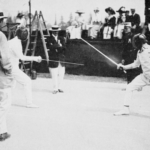 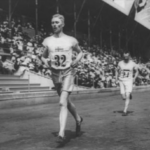 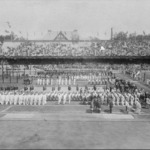 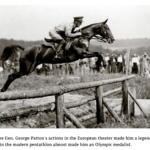