It was during a springtime drive in the Scottish Highlands when the idea formed.  Discussing it with a Patton had been hanging on the fringes of my “to do” list ever since my friendship first began with the granddaughter of General Patton seven years ago.  Looking back I did not realize when we set out from Edinburgh through the vast terrain and fields of heather that this idea would gain a life of its own, eventually evolving into a nonprofit organization based on the sport legacy of Olympian, George Smith Patton, Jr. OLY.

We were in Scotland to celebrate Helen’s son, Ragnar, soon to graduate from an independent school in Moray.  Over the course of graduation events that took place, we enjoyed watching a variety of intramural athletic competitions.  Though I knew he played rugby for Gordonstoun, I did not realize that Ragnar also competed in relay running and cricket.  I could not help but notice his natural athletic ability.  Nor could I ignore the parallel between a young George Patton competing in the pentathlon and his great-grandson utilizing the same ability to mentally and physically adapt across sport platforms, which are fundamental requirements of a successful pentathlete.

During my time working in the sport of Modern Pentathlon, I became aware of George Patton’s contribution and the international governing body of the sport, the UIPM, recognizing him in their history.  It is well documented that he participated in the Modern Pentathlon’s debut at the 1912 Olympic Games in Stockholm.  A sport that Pierre de Coubertin, founder of the modern era Olympic Games, envisioned as the ultimate moral and physical test of an athlete.  It’s as if the sport had been created mindful of what the future George Patton would become.

Remembering this, any doubt as to how important it is to honor George Patton’s sport legacy disappeared.  Seeing George Patton’s great-grandson compete furthered the notion.  Watching Ragnar display similar characteristics helped me see that this is a legacy worth curating.  That George Patton contributed to the ethic of exhibiting courage and camaraderie, self-discipline and hard work, sacrifice and respect.  Like in the pentathlon and in the military, these are the moral and physical tests of an athlete and a soldier.  It is not a leap to see where the sport of pentathlon exhibits the duties of a cavalry soldier.  George Patton was a good example of this during WWII drawing on his experience as a competitive athlete, especially a pentathlete, to perform multiple tasks under many difficult situations.

Patton Legacy Sports honors the young cavalry lieutenant who became an Olympian and the same man who went on to become a war hero.  Supporting soldiers, athletes and entities that exhibit honor and courage through peaceful acts of resolution, camaraderie and respect through fair play and hard work, including remembrance of the sacrifices made for them to pursue their goals.  We wish these competitors the best of luck and look forward to meeting many on their journey.

Ragnar Patton Plusczyk with his mother, Helen Ayer Patton, after the relay race at Gordonstoun during graduation events in May 2018. 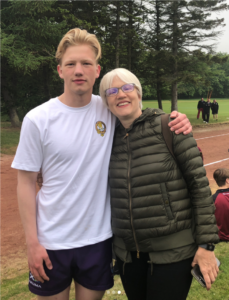