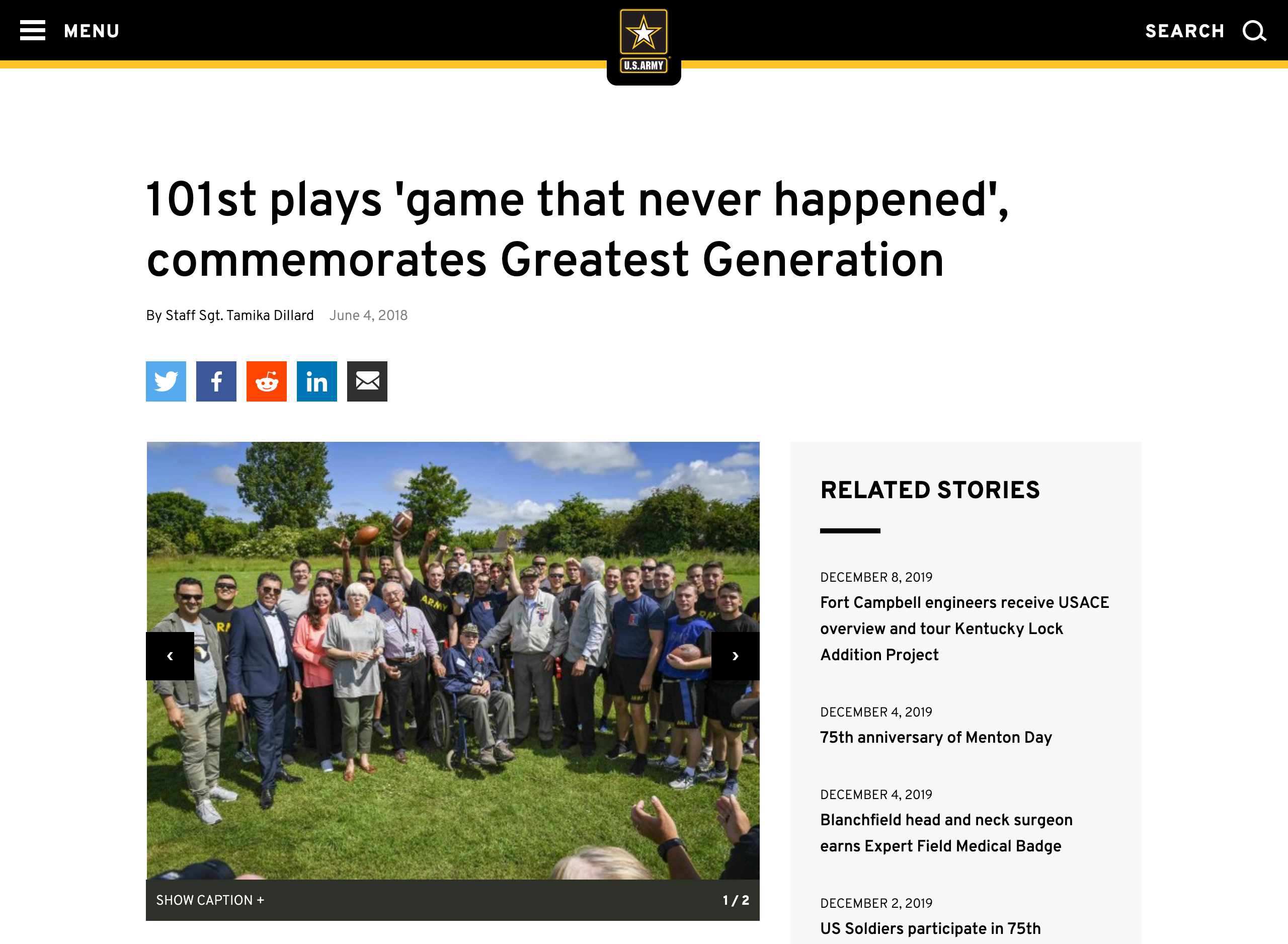 SAINTE-MERE-EGLISE, France — A calm fell over the Champagne region of France in the late fall of 1944, leading many Allied forces to believe in the possibility of WWII nearing its end. To celebrate, Soldiers from the 101st Airborne Division planned to share with their French ally one of the U.S.’ greatest pastimes: American football.

Little did the troops know a storm was brewing in the densely forested Ardennes region of France that would catapult 10,000 men into the last major German offensive campaign on the Western Front during WWII…or the Battle of the Bulge.

As war raged on from December 1944 through January 1945, the game, dubbed the Champagne Bowl, would become a distant memory until Helen Patton, the granddaughter of the late Gen. George S. Patton, recently learned of the game that never happened 74 years ago.

“Who knows how many of those guys even made it home…let alone to Christmas,” Helen said. “So, I felt that we should play the game that never happened for them. It’s a new way to commemorate. It’s a way to turn the page of history.”

Helen went on to say we’ll lose the rest of the Greatest Generation, but the game can continue on.

“We won’t have the veterans forever,” she said. “But we can do this in their honor for generations to come.”

On June 2, Soldiers from the 101st Airborne Division held the “Remembrance Bowl” here in commemoration of the “Champagne Bowl” — the ‘game that never happened.’

This year marks the 74th anniversary of Operation Overlord, the Allied invasion of Normandy on June 6, 1944 — most commonly known as D-Day. An epic multinational amphibious and airborne operation, D-Day forged partnerships and reinforced transatlantic bonds that remain strong today. Overall, U.S. service members from 20 units in Europe and the U.S. will participate in events and ceremonies May 30-June 7, 2018, in almost 40 locations throughout the Normandy region of France as part of Joint Task Force Normandy 74.

“It’s a great feeling to play a game we all love, and use it to pay tribute to our fallen heroes,” Capt. Stefan Griffith, commander of Company C, 1st Battalion, 502nd Infantry Regiment, said. “Just as they intended to do 74 years ago, we brought together guys from across the division to represent our individual units. It was truly an honor and a privilege to have gathered in their memory.”

Helen plans to continue this D-Day commemorative event and is currently working with local mayors in the area.

“Let’s think about the Soldiers who are now not able to play the game…imagine them there and do it for them,” she added. “This is how we can position ourselves in the footsteps of freedom.”

What would her legendary grandfather think about this?

“I think he would be having a blast today,” Helen mused.