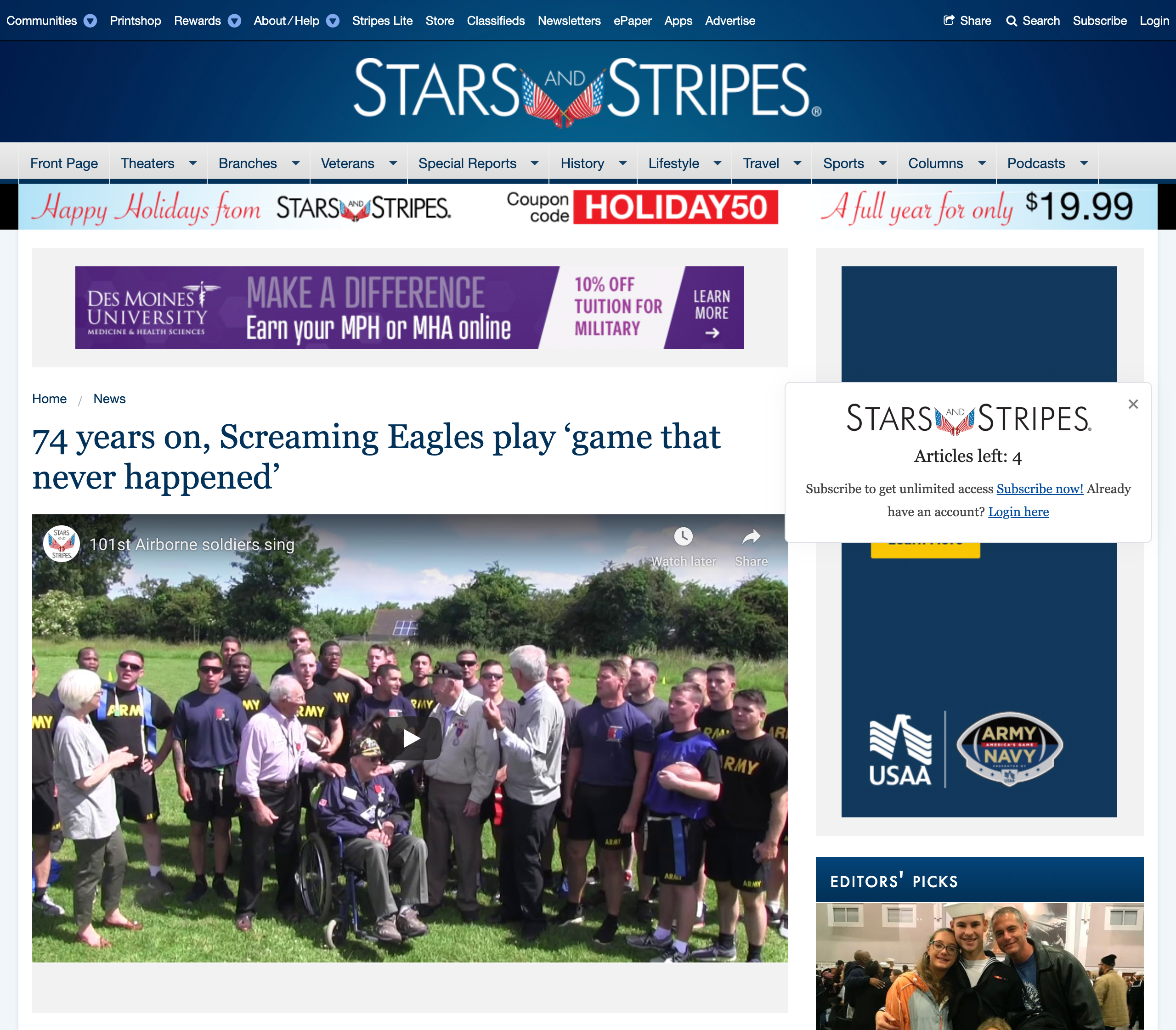 VIERVILLE-SUR-MER, France — Nearly three-quarters of a century after soldiers had to trade in their helmets, cleats and pads for combat boots, entrenching devices and M1 Garand rifles, some two dozen 101st Airborne Division paratroopers played a game of American flag football in Sainte Mere-Eglise, France.

In the late fall of 1944, with Paris secure and victory seeming inevitable, some American units, including the 101st – which had already seen hard fighting in Normandy and the Netherlands – settled in for what they hoped would be a calm winter.

Stationed in Champagne, near Reims, France, the division held tryouts for a big football game to be held on Christmas day.

Adolf Hitler had other plans, though, and in response to a German offensive in the Ardennes, the 10,000 men of the 101st marched north in mid-December to the Battle of the Bulge – having never gotten to play the game.

Two teams from the 101st Airborne Division play in the inaugural Remembrance Bowl at Sainte-Mere-Eglise, France, Saturday, June 2, 2018. The game was organized by Helen Patton, Gen. George Patton’s granddaughter, commemorating a football game in 1944 that never happened because the troops were sent to fight in the Battle of the Bulge.
MICHAEL ABRAMS/STARS AND STRIPES

“Who knows how many of those guys ever made it home, let alone by Christmas, and you know what that Christmas was like,” Helen Patton, granddaughter of Gen. George S. Patton, said. “So I thought: ‘What about playing the game that never happened? Why don’t we play it for them?’ It’s a new way to commemorate; it’s a way to turn the page of history. We can do this in their stead.”

Patton came up with the idea while speaking with a historian who mentioned the never-played game at the 101st Airborne Division Museum in Bastogne, Belgium last year.

Re-dubbing the game the “Remembrance Bowl” instead of the original “Champagne Bowl” – named after the region where the 101st was then stationed – she began organizing the game, helped by staff at the two 101st museums in Bastogne and Saint Mere-Eglise, as well as the mayor of the small French town.

Soldiers of the 101st were already planning to be in Normandy over the D-Day anniversary celebrations and jumped at the chance to honor their WWII counterparts.

“It’s really cool to stand here with our guys – a group from across the division representing our individual units but also the division as a whole,” said Capt. Stefan Griffith, commander of Company C, 1st Battalion, 502nd Infantry Regiment. “Being able to gather in their memory – and we all love playing football back home, being able to kick something like this off, it’s pretty cool.”

While there weren’t any 101st Bulge veterans present during Saturday’s game, there were a few World War II veterans, including Frank Parkinson, who served as a B-24 pilot in the 8th Air Force.

Parkinson said he could relate to how missions change, and one day you could be thinking of playing football and the next marching to fight German tank divisions in the middle of winter.

“Whatever we had to do, we did,” Parkinson said of his fellow troops. “We just went.”