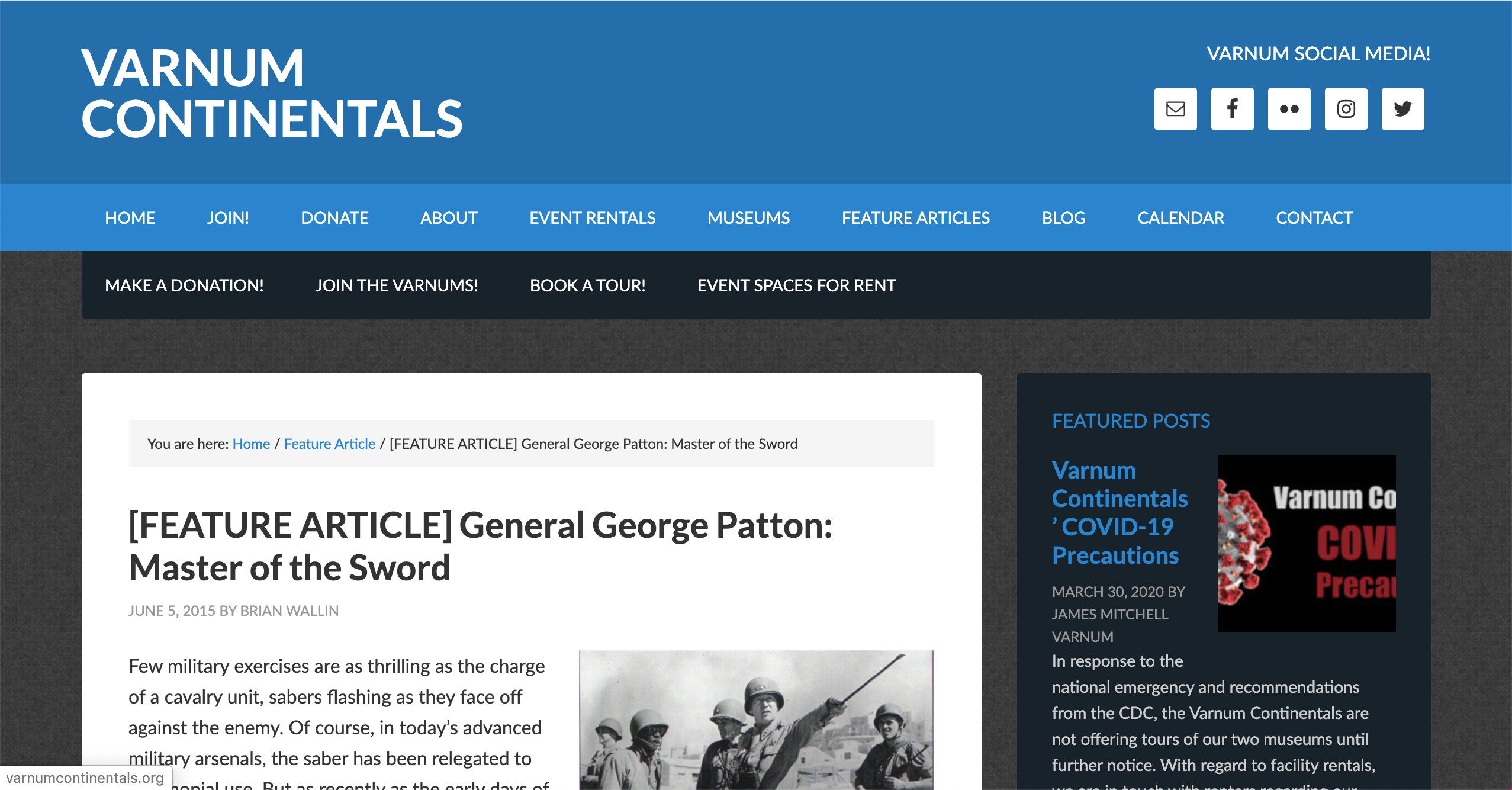 Few military exercises are as thrilling as the charge of a cavalry unit, sabers flashing as they face off against the enemy. Of course, in today’s advanced military arsenals, the saber has been relegated to ceremonial use. But as recently as the early days of World War II, you could have witnessed a cavalry charge. Considered to have been the last of them, a charge took place on August 23 (or 24), 1942, when a unit of Italian cavalry using sabers and hand grenades conducted a successful charge against Soviet troops armed with machine guns and mortars in a battle along the Don River. In January of the same year, the US 26th Cavalry mounted a charge and scattered a group of Japanese in a skirmish on the Bataan Peninsula in the Philippines (later, the starving cavalrymen were forced to eat their horses as they fought against superior Japanese forces).

In the Varnum Museum collection, we have an outstanding representation of American and foreign saber evolution. Among them is the last American design: the M1913 model, designed and advocated by none other than General (at the time, Lieutenant) George S. Patton, Jr. His design in the strict sense is a sword, not a saber since it employs a straight, rather than curved blade. It was based on the British M1908 weapon. Patton’s relatively lightweight saber uses a large, basket-shaped hilt and a double-edged blade designed for thrusting at an opponent, rather than slashing.

In the early 20th century, the Army had decided to replace the cavalry saber model that had been in use since 1861. At the time, Patton, a passionate believer in the power of the saber, was “Master of the Sword” at the Mounted Service School, at Fort Riley, Kansas. A highly accomplished swordsman who had competed in the Olympics and trained in Europe where he perfected his aggressive thrust attack pattern, Patton was known among his peers as “Saber George”. He designed a radical new weapon and prepared a detailed training manual for its mounted and dismounted use. With his typical assertive style, he managed to have his saber approved for general issue.

Quoting from then Lieutenant Patton’s report:

In the Peninsula War the English nearly always used the sword for cutting. The French dragoons, on the contrary, used only the point which, with their long straight swords caused almost always a fatal wound. This made the English protest that the French did not fight fair. Marshal Saxe wished to arm the French cavalry with a blade of a triangular cross section so as to make the use of the point obligatory. At Wagram, when the cavalry of the guard passed in review before a charge, Napoleon called to them, ‘Don’t cut! The point! The point!’

The saber commonly used by US Cavalry units up until the acceptance of Patton’s saber was the M1907, which had changed little from the curved weapons carried by US cavalry units in the Civil, Western Indian and Spanish-American Wars. The Varnum Museum’s Lounge is home to a Model 1872 officer’s saber, representative of the style of weapon that preceded the implementation of Patton’s design.

But his new weapon did not have a long use. At the beginning of U.S. involvement in World War I, several American cavalry units armed with the M1913 were sent to the front, but they were held back. Horse-mounted troops were easy prey for enemy troops equipped with Gewehr 98 rifles and MG08 machine guns. Those cavalrymen who saw combat did so dismounted, using their horses only to travel.

Although an avid swordsman, Patton readily recognized that warfare was rapidly changing, and he adapted his style of “move forward and attack” to his use of tanks in battle, a technique that became his trademark combat style in World War II. (On a side note, Patton joined with Dwight Eisenhower in the early development of tank warfare during and after World War I.

The Patton Saber in the Armory Museum collection is 44″ overall, with a 35″ blade and weighs two and one-half pounds. The blade is two-edged, straight and tapered, made of forged steel the front edge running the whole length of the blade and double-edged for half its length. It has bloodletting grooves running down each side of the blade to within 4 3/4 inches of the point. The grips are hard black rubber. The basket guard is sheet steel. The entire weapon weights about two pounds. The hickory wood scabbard is covered with rawhide and then waterproofed olive drab canvas, woven to eliminate a seam. Considering the weight of the bell and grip assembly, it is balanced much closer to the hand than the typical weapon associated with the name “cavalry saber,” reinforcing Patton’s intention that it was to be used to thrust, rather than slash at an opponent.

By the 1930s, the days of the saber as a military weapon were over. Despite strong lobbying by many supporters, including Patton who tried valiantly in 1938 to keep the weapon in use, the decision was made just prior to the start of World War II to place the majority of sabers in storage and use them only for ceremonial purposes. In 1941, the Springfield Armory, where many sabers had been manufactured, was gearing up for massive production of the Army’s Garand rifle. Today, in the hands of a trained expert, the saber still presents a powerful reminder of its role in war. The Varnum Armory collection, including the Patton Saber, can still excite the imagination.