Very Few People have ever been Killed with the Bayonet or Saber, but the Fear of having Their Guts Explored with Cold Steel in the Hands of Battle-Maddened Men has Won Many a Fight.

Before General Patton took over the tanks in WWII, Patton’s career and character would be forged with the horse and saber. Known to his peers at West Point as “Saber George” as a cadet, Patton excelled at swordsmanship. During his time there, Patton studied the dueling sword (epee) and the broadsword (cavalry saber), later fencing for his country at the 1912 Olympics in Sweden during the first-ever Modern Pentathlon. During the fencing competition, his biggest source of pride was overpowering the French swordsman, Jean de Mas Latrie. He was the only participant to give the fencing champion of the French army a loss. At a time when the French were considered the greatest swordsmen in the world, this was an amazing accomplishment. Once the Olympic Games were over, Patton was committed to learning and training with the world’s best. He traveled to Saumur, France where he studied fencing techniques from the world renowned and legendary swordsman, Charles Cléry, a French “master of arms” and fencing instructor.

Upon returning to the United States, Patton brought back a Napoleonic French Cavalry saber, used at the Battle of Waterloo. The time Patton spent training and studying with Clery was instrumental and had a lasting impact on Patton’s understanding of the use of sabers as a weapon for adaptive techniques in combat. Patton argued for a new saber combat doctrine for the U.S. cavalry, integrating French techniques. He ended up designing the 1913 Pattern “Patton” Cavalry Saber around his theories. Such was the level and detail of Patton’s expertise and passion that on February 24, 1913 the Secretary of War had ordered 20,000 cavalry sabers following the Patton designed model.

While at the Mounted Service School, Patton’s extraordinary contributions continued and he created two training manuals. One directing the basic use of the cavalry saber, updated to include tactical suggestion of his ‘Patton Saber.’ The second being the ‘Saber Exercise 1914’, which became the official training manual issued by the War Department. It illustrated a method of training for both mounted and dismounted use of the saber.

To this day, the endless argument in the fencing world between the superiority of the cut or the thrust, experts still refer to Patton’s thoughts and ideas on the matter. He was the first U.S. military officer to hold the title Master of the Sword. His emphasis on an aggressive offense and the thrust forward mindset can be seen in his strategies during WWII. Only in place of the saber, he commanded the tanks. In a world of the famous and infamous, Patton’s legacy of dedication, passion, fearless pursuits as an athlete, innovator and later commanding general, continues to inspire and influence generations of today’s soldiers and people all over the world. 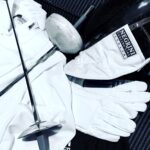 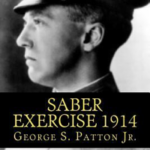 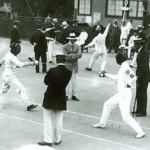